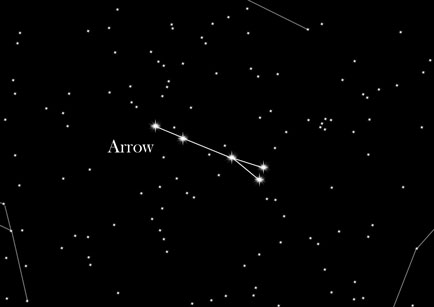 Mythology:
Prometheus is said to have stolen fire from heaven. Zeus had punished him for this, as he caught Prometheus who was placed in desert Caucasus. He had tied him to a rock above a precipice. Without eating, drinking and sleeping, he had to wait there as a thief. Every day an eagle came, called Ethon, and ate of Prometheus' liver. But it renewed again every day, as Prometheus was immortal. The greek hero Heracles then came, and killed the eagle with a Sagitta (Arrow), which is why it now has an honourary place in the sky. This is however only one of several possible myths of this constellation. Another representation refers to the arrow as a cosmic light.