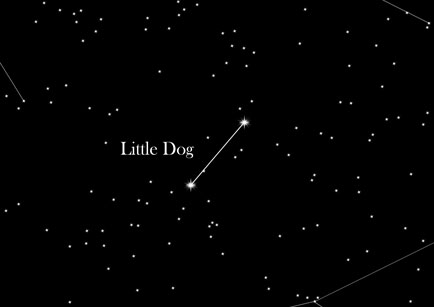 Mythology:
In Greek mythology, Dionysus is the god of intoxication, and taught the farmers Icarius how to press grapes. Icarius offered the same to the shepherds that enjoyed plenty of it. In their rush they thought Icarius had poisoned them and so they had to kill him. Erigone, the daughter of Icarius, searched for her father with her little dog. The shepherds were punished and the "Little Dog" got his pride of place in the firmament. In another version of the origin of the constellation "Little Dog" is the doggy companion of the hunter Orion.